Nawazuddin Siddiqui was dragged away by the fans, the bodyguard had to fight to get rid of him!


The number of followers of the actor Nawazuddin Siddiqui is very high. Whenever fans see him anywhere, he starts doing anything to take a selfie with him. Meanwhile, a video of the actor is going viral, in which fans are seen dragging him around for selfies. 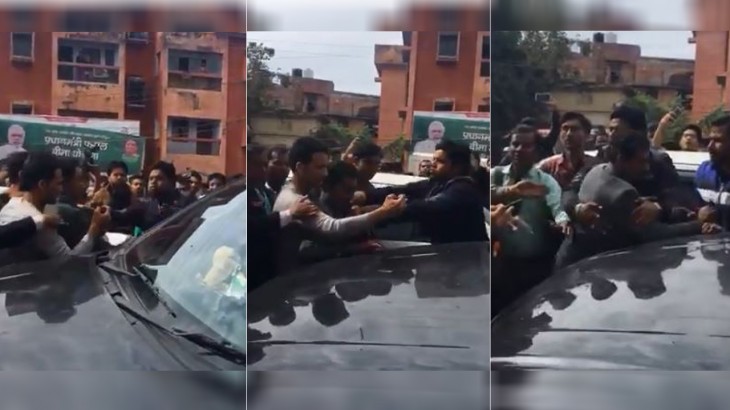 There are many such actors in Bollywood, whose following is very high. In such a situation, whenever fans see their star anywhere, they start doing anything to take selfies with them and get autographs. But many times celebrities themselves get caught up in these fan antics. Something similar happened with Nawazuddin Siddiqui. When they were spotted in one place, the public went so crazy that they started dragging them to take selfies with them. This video of the actor is going viral on social media. People are giving different kinds of reactions on this.

In the video you can see Nawazuddin Siddiqui moving forward. At the same time, some of his fans try to take selfies with him. A fan then puts his hand around his neck and drags him back while taking a selfie. Seeing this, the person present with him steps forward and takes him with him, freeing Nawazuddin from the zealots. This video of the actor is covered on social media. Let us tell you that this video is not from recent times, but from two years ago, that is, from the year 2019 during the filming of his movie ‘Raat Akeli Hai’. When he came to Kanpur to shoot. Where suddenly a lot of people came and started taking selfies with them. Meanwhile, a man attempted to take a selfie by putting his hand around the actor’s neck and dragging him away. Seeing this action of the fan, the actor’s bodyguard and the police present immediately sprang into action and separately took him out from the actor.

Social media users are giving different kinds of reactions on this video. Where one user wrote, ‘Brothers drag and drop them into the house.’ Another user said: ‘How crazy is this’. Another user wrote: ‘Taking selfies with arms full’.

Well, if we talk about the actor’s work front, then Nawazuddin Siddiqui has a lot of films in the works. In which the names of ‘Tiku Weds Sheru’, ‘Bole Chudiyan’, ‘Amazing’, ‘Fake’, ‘The Maya Tape’, ‘Rome Romi Main’ and ‘Phobia 2’ are included. Everyone is convinced of Nawazuddin’s performance. Fans are eagerly awaiting these films of the actor.