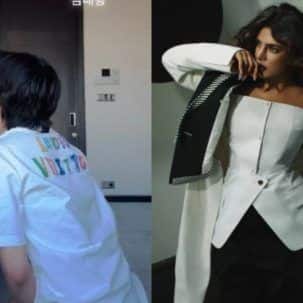 Here’s our Hollywood roundup of the day. BTS members Kim Taehyung aka V and his mascot Yeontan took over Twitter trends. He posted an incredibly cute video where he is seen kissing his pet Pomeranian. Jin also ended his dry spell on social media by gifting cute photos to ARMYs. Megan Fox and Machine Gun Kelly are now engaged. The rapper proposed to her with a 400K ring. She wrote about how they drank each other’s blood after the engagement. Priyanka Chopra Jonas spoke to Vanity Fair about the Oscar comment involving an Australian journalist. Here’s a detail… Also read: Priyanka Chopra Jonas OPENS about her heated exchange with an Australian journalist who questioned her qualification to announce Oscar nominations

BTS Kim Taehyung’s Pet Yeontan Rules Twitter
BTS V posted a couple of Insta stories with their beloved pet, Yeontan. In the video, we can see Kim Taehyung sitting on the floor while Tannie is on a bed. The pet obeys all commands given by V. The highlight is the kiss shared by the adorable pet owner and his dog. Fans were shocked by the video. They all wondered if they could trade places with the dog. In 2021, V revealed that Tannie had been battling health issues, but bore all the pain in silence. He said he was just praying for his pet’s good health. Also Read: BTS Member Jin AKA Kim Seokjin Ends Instagram Drought; shares adorable strawberry farm photos – ARMY goes wild

Machine Gun Kelly Proposes To Megan Fox With 400K Ring
Transformers actress Megan Fox is now engaged to rapper boyfriend Machine Gun Kelly. He proposed to her with a 400K ring that was designed by him and Stephen Webster. The actress revealed that they drank each other’s blood. She has three children from her first husband, Brian Austin Green. She wrote, “We didn’t realize the pain we would face together in such a short and hectic period of time. Unaware of the work and sacrifices the relationship would require of us, but intoxicated by love. And karma.”

Priyanka Chopra Opens Up About Oscars Comment
We all remember how Priyanka Chopra Jonas got angry when an Australian journalist questioned her and Nick Jonas’ achievements in hosting the Oscars. She told Vanity Fair: “I don’t normally get mad, but it pissed me off.” Priyanka Chopra Jonas said she is undeterred by such negativity. She further said, “I will be angry, I will be angry, I will be upset. I will talk about it with my family. I may cry a little bit, but that doesn’t change my relationship with my job and what my real quest is. My quest is not the opinions of people.” people. My search is my job.”

Sometimes he used to dance behind the stars in movies, then as a lead actor, SSR made people go crazy for himself.