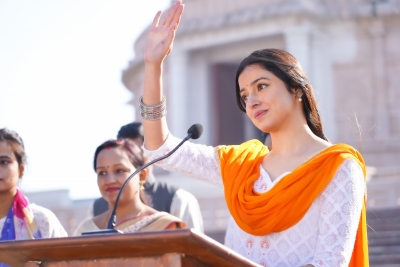 Bombay:
Satyamev Jayate 2, starring John Abraham and Divya Khosla Kumar, is awaiting release. Divya along with her co-star John has been busy promoting the long-awaited release.

The actress plays a politician in the film, who is best defined as a strong and empowered woman. Divya has made unprecedented preparations to make her character meaningful.

Speaking of her director Milan Milap Zaveri and her guide, the actress said that Milap had told me that my character is to portray the strong and empowered woman of the current generation who maintains a balance between work and life and who enjoys her life. . for him. I have watched many iconic movies like Aandhi to understand how to play my role to the best of my ability.

Divya says that it was especially difficult for me to get into character as I had to gain weight for my role. I am very happy to have the opportunity to show a new side of me and I hope that the audience will enjoy my work on Satyamev Jayate 2.

With this film, Divya joins the list of Bollywood actresses such as Richa Chadda in Madam Chief Minister, Kangana Ranaut in Thalaivi and Suchitra Sen in Aandhi who have played politicians in their films.

Directed by Milan Milap Zaveri, the film is set to hit theaters on November 25.