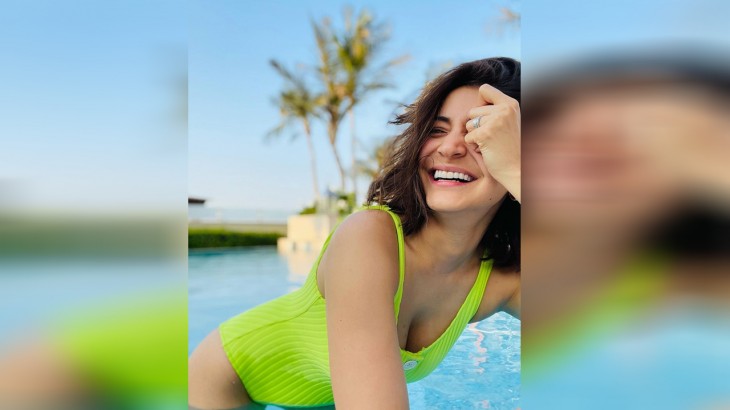 Bollywood actress Anushka Sharma may have been away from movies since her marriage, but the number of followers on social media has increased enormously. Anushka Sharma is very active on social media and often shares her photos and videos with fans. Recently Anushka Sharma has shared some of her images in which her glamorous look is perceived. In these images Anushka is seen having fun in the pool. These photos of Anushka have millions of likes.

Anushka Sharma has shared 2 images on her official Instagram, in which she is seen smiling in the pool with a neon-colored monikon. Anushka’s appearance with open hair looks amazing. Seeing Anushka’s photo, her husband Virat Kohli also couldn’t help but comment. Virat Kohli has shared a heart in the comment. Seeing that it is clear that upon seeing Anushka, Virat’s heart has been beating again.

Anushka Sharma and Virat became parents earlier this year. They have both named their daughter Vamika. Anushka often shares photos with her daughter on social media. Virat and Anushka got married in the year 2017. Talking about Anushka Sharma’s work, Anushka Sharma was last seen in Shahrukh Khan and Katrina Kaif’s film ‘Zero’. The film got a very good response from the public. Along with this, Anushka has also stepped on OTT as a producer. ‘Bulbul’ and ‘Paatal-Lok’ were released under the banner of the Anushka production house.