Taapsee, protagonist of Prateek Where is that girl? Launch of the first look


Taapsee, protagonist of Prateek Where is that girl? Launch of the first look 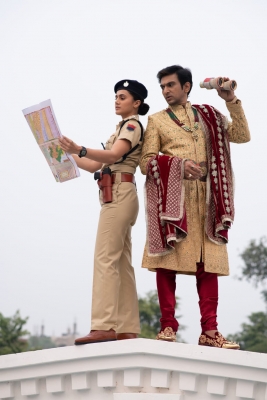 Bombay:
Where is that girl’s movie? The creators of the next film by Prateek Gandhi and Taapsee Pannu have released the first look.

The upcoming film from Junglee Pictures and Roy Kapur Films studio is a comedy-drama, in which Taapsee and Prateek will meet together for the first time.

Playing a policewoman for the first time and sharing her stunning movie looks, Taapsee said: Playing a policewoman and making a comedy movie was always on my wish list. I’m glad it’s finally possible. I had seen Prateek’s work, I think he is a very talented actor and I really enjoyed working with him.

Taapsee will be seen doing comedy for the first time in the role of a powerful cop. At the same time, Prateek will also be seen in a different style in the film. The filmmakers have shared an exciting first look at the film’s actors from their current filming schedule in Jaipur.

Prateek is very excited to play his character.

Prateek said, where is that girl? My character in the movie is very different and it is very exciting. Taapsee is super talented and I am very excited to be working with her. Arshad has written the story in great detail! I’m sure the audience will like it.

Junglee Pictures and Roy Kapur Films Woh Ladki Hai Kahaan? Starring Taapsee Pannu and Prateek Gandhi and written and directed by Arshad Syed. This movie will be released next year.