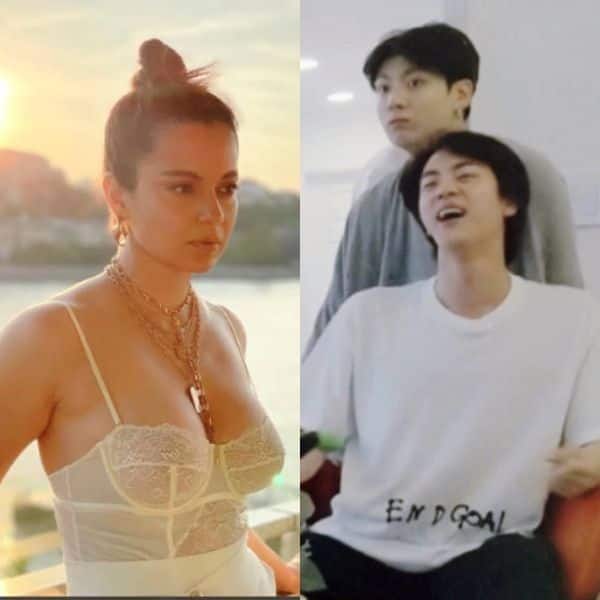 Although it was a weekend, many headlines caught the interest of Bollywood fans. Take a look at the trendy entertainment news from all over India. Also Read – BTS In The Soop 2: Jungkook and Jin’s cute moves on Sunny Leone’s wrist are the best you’ll see this weekend – check out the fan-made edit

Kangana Ranaut breaks silence on Bheekh’s comment
Kangana Ranaut has finally ended her silence on Bheekh’s comment. The actress’s statement angered political leaders across the spectrum. Kangana Ranaut wrote: “Everything is mentioned very clearly in the same 1857 interview first collective fight for freedom … along with the sacrifice of greats like Subhash Chandra Bose, Rani Laxmibai and Veer Savarkar ji. 1857 I know, but what war took place in 1947 I am I do not know, if someone can bring me to consciousness, I will return my Padma Shri and apologize too … please help me with this. I have worked on a feature film of a martyr Rani Laxmi Bai … extensively researched on the first freedom fight 1857 … nationalism rose and the right wing too … but why did he die suddenly? and why did Gandhi let Bhagat Singh die … why was Neta Bose assassinated and never got the support of Gandhi ji? Why was the dividing line drawn by a white man …? Instead of celebrating freedom why Indians killed each other some of the answers I am looking for please help me find them. ” Also Read – BTS: The True Story Behind Jin From In The SOOP’s Iconic Outfit Will Blow You Away

Deepika Padukone – Ranveer Singh takes off for a little break
Deepika Padukone and Ranveer Singh will celebrate their third wedding anniversary tomorrow. The couple got married on November 14, 2018 on the stunning Lake Como in Italy. The marriage was an intimate affair. After their return, the couple hosted lavish receptions in Bangalore and Mumbai. A source said, “Despite their busy filming schedules, Deepika and Ranveer set out to take some time off and relax together on their third wedding anniversary.”

Kartik Aaryan wants to work on a movie directed by Salman Khan
Well, Kartik Aaryan is coming as a guest to Bigg Boss 15 to promote his movie, Dhamaka. It is directed by Ram Madhvani and is coming to Netflix. It seems that he asked Salman Khan what he would do if he was not an actor. The superstar said he was a director. Kartik Aaryan said, “Mujhe bhoolna mat jab aap director ban jao.”

First look at Chhatriwali
The first glimpse of Rakul Preet Singh’s Chhatriwali is available. In the movie, she plays the role of a condom tester. She is shown as a simple graduate in Lucknow who accepts the job due to unemployment. The film’s director, Tejas Prabhas Vijay Deoskar, said: “Our film is a social and family entertainer, whose goal is to destigmatize the use of condoms and we are really excited that the film has gone down the drain. Rakul brings freshness to With every role she portrays and with a sensitive and thought-provoking theme like this, audiences are sure to enjoy a roller coaster ride of comedy. “

BTS’s Jinkook dance gets a baby doll twist
In The Soop 2 concluded yesterday with the last episode. It was full of adorable moments between Jungkook and the older hyung, Kim Seokjin. From waking up Jungkook with hugs to feeding him and dancing together, JinKook’s transporters had a gala time. A fan has made a video where she has put the song Baby Doll for her dance.

Read more: BTS in the Soop 2: Jungkook and Jin’s cute moves on Sunny Leone’s wrist are the best you’ll see this weekend – check out the fan-made edit

Prabhas’ song RadheShyam is coming out on Monday
RadheShyam’s first song will be out on Monday. This was confirmed by the creators. The film’s score is by Yuvan Shankar Raja.