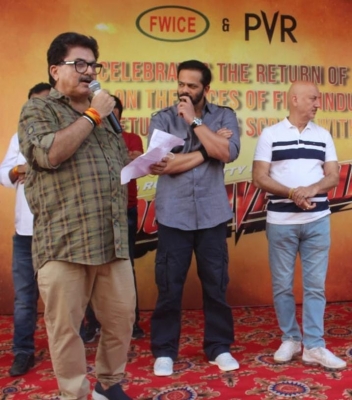 Bombay:
The Federation of Film Employees of West India (FWICE) on Friday honored producer and director Rohit Shetty for the success of Akshay Kumar and Katrina Kaif star Sooryavanshi.

The federation also praised Shetty for his continued support of film industry workers even amid the Covid-19 wave. The Federation represents 31 unions of film and television workers.

According to the federation, Sooryavanshi has given the industry hope that the audience will return to theaters.

The congratulatory ceremony was attended by senior actor Anupam Kher, who said that my sister used to say that whenever there is a problem, a messiah always comes. Today, Rohit Shetty has shown the way to the industry by releasing her film in theaters first.

FWICE President BN Tiwari said that Rohit Shetty and her team have always supported film workers, so we have organized an event to honor them. He is not only a director but also a fighter. It has always been with the workers. I helped them all the time in the confinement.