Fan was forcibly doing such an act with Salman, he did this out of anger


Bollywood’s Dabang Khan is known for his tremendous style. By the way, Bhaijaan lives with a lot of love with his fans. But this time he has done something with his fan, like no celebrity can do with his fans. 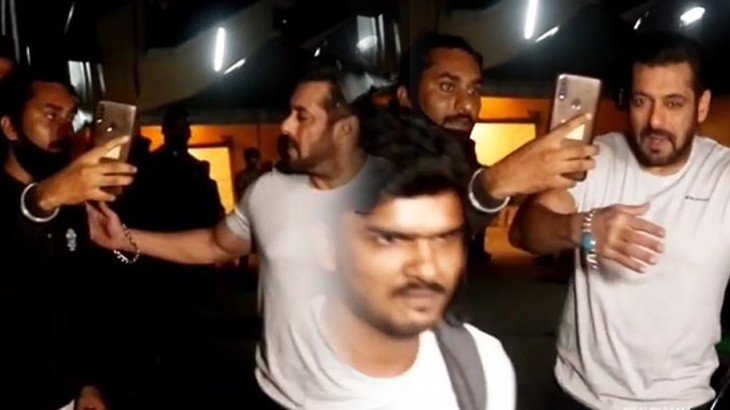 Salman Khan did this job with a fan (Photo credit: @viralbhayani Instagram)

Bollywood’s Dabang Khan is known for his tremendous style. By the way, Bhaijaan lives with a lot of love with his fans. But once they get angry, it becomes difficult to handle them. After which the front has to face the ravages of the actor’s anger. Recently, such a case has come to the fore. Where Bhaijaan got so mad at one of his fans that he called him very bad. Not only this, Bhaijaan also shook his fan’s hand by taking a selfie.

Significantly, fans are ready to do anything to catch a glimpse of Salman. In such a situation, wherever Salman goes, there are no crowds of his fans. The same thing happened this time too. There were a crowd of people around Salman. Meanwhile, a man tried to take a selfie with him. In which Salman seemed to reject it. But he disagreed and kept trying to take a selfie. In such a situation, Salman got angry and asked to leave, waving his phone. Viral Bhayani captured the whole thing on his camera, which is now going viral on social media. Salman’s attitude in the video was worth seeing. You also watch video-

Social media users are reacting fiercely to this. Where Bhaijaan fans like his attitude. At the same time, there are some people who say that Salman shouldn’t have done this to his fan. After all, he just wanted to take selfies.

On the other hand, if we talk about Bhaijaan’s work front, Bhaijaan will soon be seen in the next movie ‘Antim’. In which he will be seen with his brother-in-law Ayush Sharma. In this movie, you will be seen in the role of a police officer. Fans are eagerly awaiting his movie. Salman will once again show his acting power in the movie ‘Tiger 3’ with Katrina Kaif. At the same time, ‘Kick 2’ is also with Salman, from which Salman will once again entertain the public. Apart from this, the actor has many other projects.