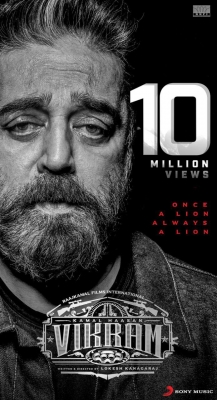 Chennai:
The first look at actor Kamal Haasan’s action thriller Vikram, directed by Lokesh Kanakraj, has garnered more than 10 million views in less than 24 hours since its release.

To usher in celebrations for actor Kamal Haasan’s birthday, Vikram’s unit released the first look at the film on Saturday night.

Announcing the achievement, Raj Kamal Films International, which is producing the film, tweeted: “Vikram’s Duniya First-Look has garnered more than 10 million views in less than 24 hours.”

The video on YouTube shows a thrilling action sequence from the film, in which Kamal Haasan is seen using a metal shield to defend himself from bullets inside a prison.

Vikram has music by Anirudh and cinematographer by Girish Gangadharan. Edited by Philomin Raj, the film, which also stars actor Vijay Sethupathi, was directed by N. By Satish Kumar.