Launch of the first look of Ravanasur by Ravi Teja


Launch of the first look of Ravanasur by Ravi Teja 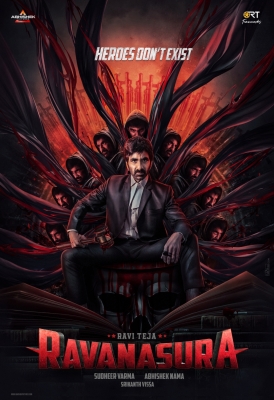 Hyderabad:
Mass Maharaja Ravi Teja and director Sudhir Verma are collaborating on the star’s 70th film, which is known simply by his working title hashtag RT70.

The name of the film Ravanasur was announced with the release of his first look on Friday, November 5. The story of the film will revolve around 10 different forms of the Demon King that appears in the Ramayana of Valmiki.

Produced by Abhishek Nama under the banner of Abhishek Pictures and RT Teamworks, the first poster for the film shows Ravi Teja sitting in a chair with 10 heads as Ravana behind him.

The film’s writer, Shrikant Visa, is believed to have written a powerful and first-of-its-kind story for the film. Known for his exceptional filmmaking, director Sudhir Varma has cast Ravi Teja for a distinctive role.