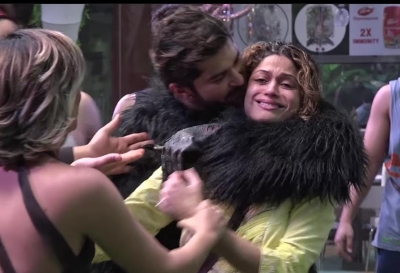 Bombay:
Bigg Boss 15 is full of drama and the Diwali episode was no different. While the contestants received gifts from their families, on the other hand Misha Iyer and Umar Riaz did their best to keep housemates away from gifts to win the captaincy task.

Shamita Shetty was desperate to open her gift, but Umar did not allow it and finally had to throw away her gift. However, Nishant was seen enjoying the moment, which angered Shamita. She confronted and began to vent her anger. Nishant said that everyone in the house has the right to speak their minds.

Apart from this, the wild card entries Neha Bhasin and Rakeysh Bapat will also be seen on the show. Shamita hugs him with tears in her eyes. Neha tells Shamita that she is unhappy with Karan’s arrival at the house and tells him that she and Tejashwi are not loyal to anyone.

Prateek has a great relationship with Neha, but when he tries to come and talk to her, she is cold to him. She says I don’t want to stay in that place again.

It will be interesting to see if Prateik and Neha’s friendship will remain the same as Bigg Boss OTT or their equations will change this time.

Bigg Boss 15 is broadcast in color.