Akshay Kumar, Sonu Sood, Rajkummar Rao, Madhuri Dixit and other Bollywood stars mourn his death; ‘This is so unfair’


Bigg Boss 13 winner Sidharth Shukla is no more. His sudden disappearance has caused a stir in the Bollywood and television industry. The actor who appeared in many TV shows and movies like Humpty Sharma Ki Dulhania was at the peak of his career. It is said that he suffered a heart attack and breathed his last at home. Many Bollywood stars such as Sonu Sood, Manish Malhotra, Sanjay Kapoor, Riddhima Kapoor Sahni, Manoj Bajpayee and more have mourned his passing. Also read: TOP 10 KINGS and QUEENS of Bollywood comeback who won hearts with their second ininnings – see photos

Really sad to know about the passing of #SiddharthShukla. I didn’t know him personally, but it’s heartbreaking to know that such a talented life is gone so soon. Om Shanti

Is it hard to believe that he no longer exists, my condolences to his family? RIP my friend, we will miss you. pic.twitter.com/B9my98mrb7

Can this year get worse? Shocked and extremely saddened to learn @sidharth_shukla s disappearance. My heart goes out to your family ?? 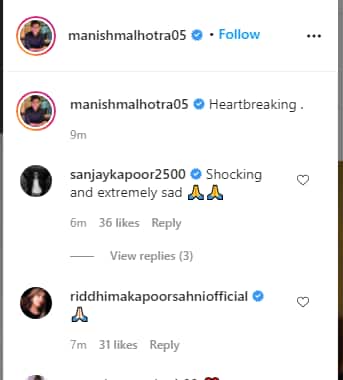 My heart and brain are numb right now ……. I can not believe ……. Rest in peace Siddharth Shukla ??? Condolences to his family and fans?

MY GOD!!! This is so shocking !!! Words will not be able to describe the shock and sense of loss for those close and dear to you! Rest in peace! ?? No yaar !!!! https://t.co/HmcF1ppJFX

It is amazing and shocking. You will always be remembered @sidharth_shukla. May your soul rest in peace. My deepest condolences to the family?

It’s true. But I still can’t believe it doesn’t exist anymore. He left too soon … my sincerest prayers and condolences to his family, loved ones and his fans. May his soul rest in peace. pic.twitter.com/Dp9dXCjlp8

Saddened and shocked to learn of the disappearance of the very talented, popular and handsome actor. @sidharth_shukla. Life is very unpredictable.
May God bless your soul, rest in eternal peace. pic.twitter.com/5Y0PxWkCEL

Can’t process this. Rest in peace #SidharthShukla. You were truly loved by millions. ? pic.twitter.com/Wj2E7OYF9f

This is so unfair. Sidharth left too soon. Rest in peace brother. You will be in our hearts forever. My condolences to his family, friends and fans. pic.twitter.com/nMLWvEhL6J