A live broadcast was held on August 19, when BTS members Jin and RM sampled sandwiches and cakes. They even revealed that the dishes are from a cafe called Plate D, which is located in Nonhyeon-dong, Seoul. Jin and RM don’t like avocados and they didn’t feel like avocado sandwiches. Although RM tried the ham sandwich and called it “JMT” which is Korean slang for “delicious”. Also Read: BTS’s MAP OF THE SOUL Tour Is Canceled, Scarlett Johansson And Colin Jost Welcome A Baby And More Hollywood News Makers Of The Week

ARMY knows Jin doesn’t like cream, but he still tried the lemon peach cream pie. Both Jin and RM agreed that the food tastes good and continued the live broadcast. Everything was going well, but the cafe decided to share Instagram stories about its baked goods that were featured on the live stream. They shared a screenshot from the live show where RM called the ham sandwich “JMT” and the cafe captioned it “LOLOLOL THE BANGTAN COIN.” In Korea, the word “coin” is used in combination with another word that means “to win the jackpot.” Read Also: BTS’s Suga REMEMBERING An Interesting Incident About His Birthday That ARMY Had Never Heard Of 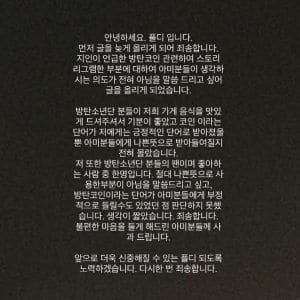 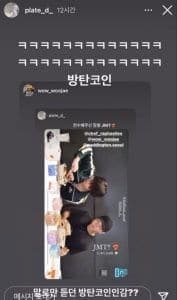 Well, this certainly didn’t go well with ARMY. Plate D’s Instagram story used the phrase ‘BTS COIN’ presumably to celebrate that the cafe’s name and menu are popular and promoted on social media platforms. But despite this, it has left Korean ARMYs aware of the connotation of disgust and shock.

Before long, the cafe began to receive criticism for the misnomer they used. Plate D was quick enough to issue an apology as he said the cafe was unaware of the negativity surrounding the word. His note read: ‘Hi, this is plate D. We apologize for the delay in sending you this apology. We want to clarify why we share the Instagram story that says ‘Bangtan Coin’. We assure you that it was not our intention to disrespect anyone in any way.

We loved that BTS members liked Plate D’s sandwiches and cakes. We didn’t know that the word ‘currency’ was being used negatively. We honestly didn’t expect to offend ARMYs with this phrase.

We are also huge fans of BTS and we love them. We would not have used the word if we knew it would be disrespectful to them. However, we should have known that it would be annoying for ARMYs to hear us talk about BTS like that. And we’re to blame for that, we’re really sorry.

We will try to do better in the future. We apologize once more. ‘ Before long, Plate D’s apology to the entire ARMY around the world created even more stir. ARMY suspected that the cafe had internal connections to HYBE and even questioned whether anyone on the BTS team is allowing the cafe to get free promotions.

Before long, Plate D shared another apology and clarified that he has no connections to HYBE. The cafe even apologized again for disrespecting BTS. The note on plate D read: ‘… We apologize for using the word without thinking because we got too excited about the situation. We are sincerely sorry. Thank you ARMYs for letting us know about the issue and helping us realize what we had done wrong … One more thing about the growing suspicion that we are trying to get free promotion through an intra-agency connection, and this is the truth. Nobody in Plate D knows anybody in HYBE. We have no connection there. We do not ask to sponsor food and we do not ask for free promotion… ”.