On July 19, actress Shilpa Shetty’s husband and businessman Raj Kundra was arrested by Mumbai police for his alleged involvement in making adult films and posting on apps. With each passing day, new developments in the case point towards the fact that there will be no early respite for the family. Interestingly, after the details of the case came out, we saw people blaming the actress for her husband’s crimes and trolling the star on social media. While the Hungama 2 actress is one of the judges on the dance reality show, Super Dancer 4, in the middle of her husband’s porn case, she took a break and we saw Karisma Kapoor and Riteish Deshmukh – Genelia D’Souza showing up. as guest judges on it. . 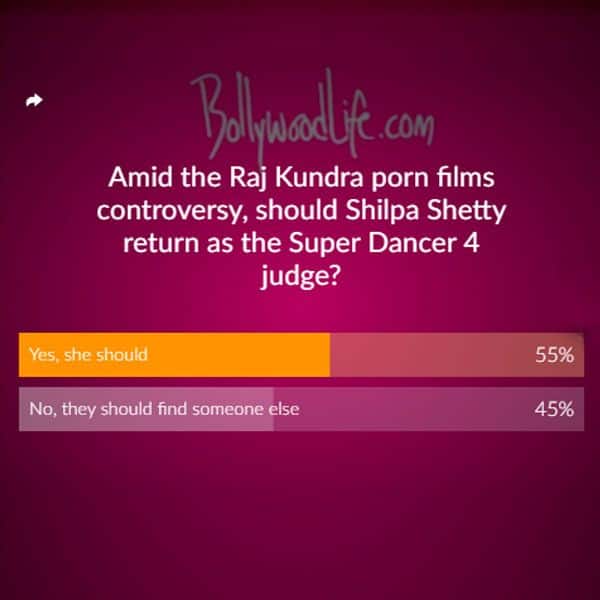 While many demanded that Shilpa be expelled from the show, a certain section of the audience also supported the actress. With these kinds of reactions, we thought about asking the audience if the actress should return as judge or not through our survey. The results are published, and it seems that we have a mixed response, although if we consider the majority, users have supported the Bollywood actress. While 55 percent of the votes were in favor of Shilpa Shetty, 45 percent of the people said she should be officially kicked out of the show. Well, only time will tell if the actress will be replaced by another celebrity or not in Super Dancer 4.

Meanwhile, the actress took to social media on Monday and released her statement on the entire controversy. She said yes! The last few days have been challenging on all fronts. There have been many rumors and accusations. Lots of unwarranted slanders about me released by the media and (not so much) sympathizers as well.
Lots of trolling / questions posed … not just me but my family as well. MY BOOTH … I HAVE NOT COMMENTED YET and will continue to refrain from doing so in this case as it is a subjudgment, so please stop attributing false quotes on my behalf. Reiterating my philosophy of, as a celebrity, “Never complain, never explain.” All I will say is that as this is an ongoing investigation, I have full faith in the Mumbai police and the Indian judiciary. As a family, we draw on all of our available legal resources. But, until then, I humbly ask you, especially as a MOTHER, to respect our privacy for the sake of my children and I ask you to refrain from commenting on half-hearted information without verifying the veracity of it. I am a proud law abiding Indian citizen and a hardworking professional for the past 29 years. People have put their faith in ME and I have never let anyone down. So, most importantly, I ask that you respect my family and “my right” to privacy in these times. We do not deserve a trial with the media.
Please let the law take its course. Satyamev Jayate! With positivity and gratitude, Shilpa Shetty Kundra. “