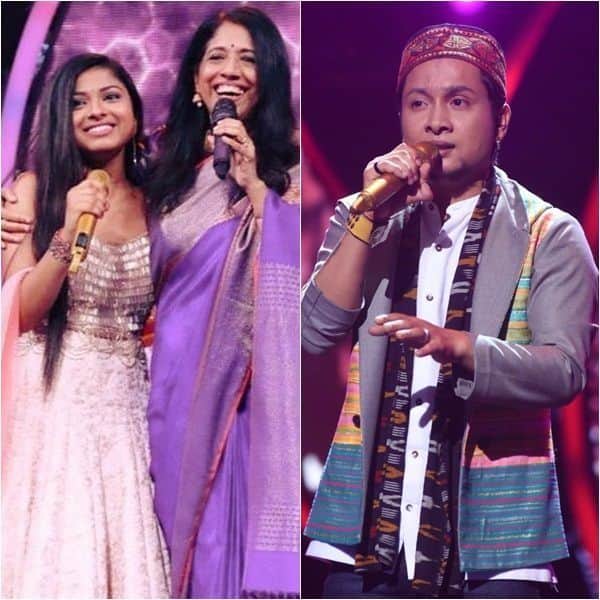 It was a magical night on Indian Idol 12 with veteran singers Kumar Sanu and Kavita Krishnamurthy, who have sung and delivered many hits together in the ’90s. The top 6 contestants left no stones unturned to bring back the magic of the’ 90s alive. the stage with his talent for singing. But among all, it was Arunita Kanjilal and Pawandeep Rajan who managed to surprise the fans with the brilliant performances tonight. Also Read – Indian Idol 12: Fans Unite Behind Pawandeep Rajan, Arunita Kanjilal, And Shanmukhapriya To Be Top 3 Finalists – Read Tweets

When Arunita performed in the songs of Kavita Krishnamurthy, Hum Dil De Chuke Sanam, and Maar Dala, fans didn’t hold back in praising her singing skills. They felt that Arunita did justice to the songs and even Kavita was moved by her performance and said she was looking forward to hearing a recording. They even sang Dola Re Dola together. Also read – Indian Idol 12: Arunita Kanjilal blushes when Pawandeep Rajan calls her his ‘special best friend’

Pawandeep was not far behind, who wowed everyone when he performed in the song Tu Hi Re de Bombay (1995) sung by Hariharan and Kavita Krishnamurthy. While some fans praised Pawandeep as the winner of Indian Idol 12, some said they wouldn’t mind if Arunita and Pawandeep share the winner’s trophy together. Read Also – Indian Idol 12 Grand Finale: Pawandeep Rajan, Arunita Kanjilal To Get A Manish Malhotra Makeover For The Big Day?

@ indian_idol12 1.8.2021: Wonderful start with the song of Arunita’a in front of the GRATEFUL GUESTS Kumar Sanu ji #kumarsanu and Kavita Krishna Murthy ji #KavitaKrishnamurthy … most importantly, I liked the WORDS APT, GESTURES USED BY legendary guests for Arunita. ??

Hum Dil De Chuke Sanam: That was Arunita’s magic. As Kavita ji said, it was a singing take, but it seemed prerecorded. @ArunitaO #IndianIdol

Time stops when Arunita sings … and only musical notes flow effortlessly.
“Maar daala” was one of those songs. Great vocal tone and excellent note control. ????????

Gorgeous performance by Pawandeep. He is full of talent. Only he and Arunita go in parallel. Others are trying to catch them. Are you still like this? ❤️

#Arunita has become an extraordinary singer!

He’s an all-rounder compared to all the other singers on the show, in addition to singing, the judges should also appreciate the talents of others in a singer, who has pawandeep, and do his singing justice. Singing alone shouldn’t be the only criteria.

@ indian_idol12 #PawandeepRajan
Once again, after Pawandeep’s excellent singing was the only exception for ‘mausam badal diya’, Kumar Sanu and KK did not give a standing ovation, did not comment from three judges, focused more on forced and false naatak of friendship with Arunita. Why ?????

Wow … what a great singer Pawandeep is. The way Sony TV / Indian Idol is trying to downplay it is really unfortunate. They even made Kumar Sanu hint that he did not sing the first song well. But the truth and the talent are with Pawandeep. God be with him. All the best

Meanwhile, host Aditya Narayan announced on Sunday’s episode that Indian Idol 12 will have its top 5 contestants. That means that a contestant will surely be eliminated a week before the grand finale. Who will it be? Keep checking this space for the latest updates on Indian Idol 12.