Well, June is almost over and for all those wondering what to watch this weekend, we’ve got you covered with some exciting movies, shows, and series to binge watch. Here’s a list of some of the latest shows and movies on Netflix, Amazon Prime Video, Zee5, and more that will keep you busy all weekend. Also Read – Ray’s Web Series Review: Except for performances by Manoj Bajpayee, Kay Kay Menon, and Ali Fazal, this will make Satyajit Ray very restless in the afterlife

On Trip With Derbez – Amazon Prime Video Also read – Fukrey 3: Richa Chadha AKA Bholi Punjaban REVEALS when the movie will be released and is expected to be released [EXCLUSIVE VIDEO]

The recently released international comedy series – De Viaje Conlos Derbez will keep you engaged at all times. This Spanish comedy series is about the Derbez family and their fun adventure journey. Also read – Trending Entertainment News Today – Shehnaaz Gill is brutally trolled after a video of a team member helping her with her footwear goes viral, Kartik Aaryan to star in Satyanarayan Ki Katha

Did you enjoy watching The Umbrella Academy? Then surely you should check out The Mysterious Benedict Society and we are sure you will love its story and plot. The story is about four gifted orphans who have unique abilities.

The Sex / life story revolves around a love triangle between a woman, her husband, and her past. The story is about Billie Connelly, who married Cooper and is the mother of two young children. Before marriage, she is a free-spirited wild girl living in New York City, but after marriage she burns out taking care of everything. Billie begins to write a diary and fantasize about her passionate exploits with her sexy ex-boyfriend Brad. But life changes dramatically when her husband finds her journal. What will happen next? 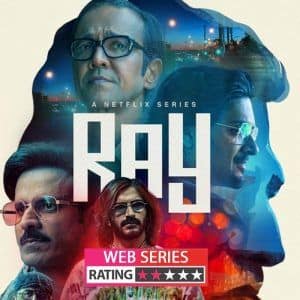 These 4 episodes with a cast including Manoj Bajpayee, Harshvardhan Kapoor, Ali Fazal, and Kay Kay Menon, among others, showcase Satyajit Ray’s brilliant writing that brings the stories to life. These short stories will keep you completely hooked until the end.

A beautiful Pakistani show against the backdrop of the Indo-Pak conflict, starring Ahad Raza Mir, Sajal Aly, and Manzar Sehbai in the lead roles. Dhoop Ki Deewar is about the lives of two sons of martyred soldiers from India and Pakistan who lost their lives in a cross-border battle.

Directed by Ranjan Chandel, Grahan stars Pavan Malhotra, Zoya Hussain, Anshuman Pushkar, and Wamiqa Gabbi in the lead roles. The story takes place in 1984, when the nation was rocked by the riots that took place after the assassination of Prime Minister Indira Gandhi. The show is inspired by the novel Chaurasi by Satya Vyas.