Urvashi Rautela’s Patola Saree for Manoj Kumar’s granddaughter’s Mehndi ceremony will make a hole in even the richest people’s pockets. 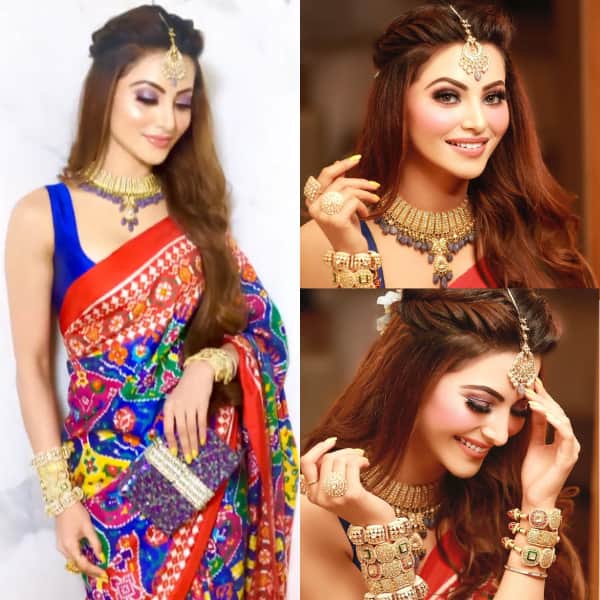 Urvashi Rautela is one of the most beautiful actresses we have in the industry. Aside from her choicest projects, stunning looks, and philanthropic work, Urvashi is known for her exquisite style statements. From the airport look to the red carpets, everything has an extra sparkle and the actress wears some of the most luxurious and expensive outfits that always impress critics and her fans. The Hate Story 4 actress recently attended Manoj Kumar’s granddaughter Muskaan Goswami’s Mehndi ceremony and opted for a beautiful traditional Gujarati look. She shared the photos and videos of herself on her gram. Also read – SAY WHAT! 46 years later, Amitabh Bachchan reveals that his ICONIC Deewar look was the result of THIS mistake

The Sanam Re actress captioned the post saying: “I wear one of my favorites PATOLA SAREE made in GUJARAT. Each classic Patola saree can survive for about 300 years and retain color. They are known for their striking bright colors and geometric designs interspersed with folk motifs. The Nightly Vibes Mehendi of Bride Muskaan Goswami “. Have a dekko in the video and photos below: Also read – Bigg Boss 15: Aditya Narayan, Shabir Ahluwalia, Karan Wahi and 6 more contestants from Khatron Ke Khiladi we want to see on the Salman Khan show

Urvashi Rautela’s multi-colored saree with red trim and blue blouse is from designer Asha Gautam and costs around Rs. 4.25,500. The bracelets and rings are from Pooja Diamonds worth Rs. 24.50,000. The neckpiece and mang tikka that look real in beauty come from Karan Johar’s collection at Tyaani Jewelers, which has a modern take on the traditional twist. Urvashi Rautela’s full look for Mehndi celebration night goes up to Rs. 58,75,500 and we must say that he has achieved it with sheer elegance and great grace. Also read: Priyanka Chopra, Katrina Kaif, Kareena Kapoor Khan and 4 more Bollywood actresses who raised their eyebrows with daring necklines – see photos

On the job front, Urvashi will make her Tamil debut with a big-budget Tamil science fiction film in which she will play the role of a microbiologist and an IIT. She also has a bilingual thriller, Black Rose, along with the Hindi remake of Thirutu Payale 2. The actress recently received a huge response for her song Doob Gaye alongside Guru Randhawa and Versace Baby alongside Mohamed Ramadan. Additionally, Urvashi stars in a lead role in Jio Studio’s Inspector Avinash web series alongside Randeep Hooda, which is a biopic based on the true story of super cop Avinash Mishra and Poonam Mishra.