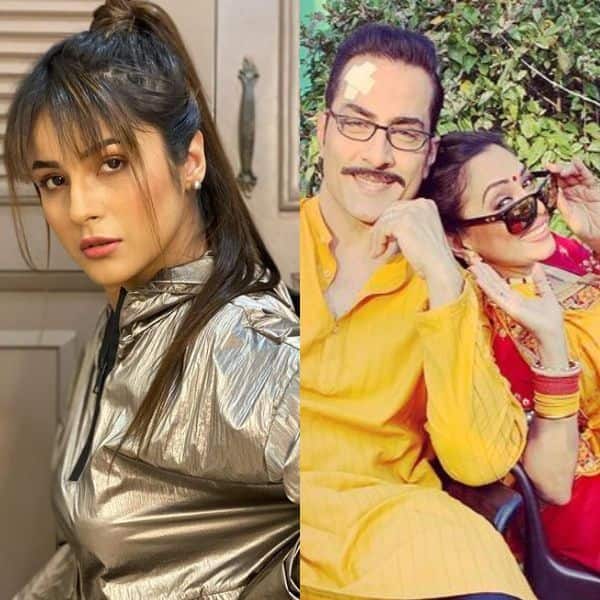 The day is over and as usual we return with all the important stories that took place today. From Shehnaaz Gill being trolled to Sudhanshu Pandey addressing rumors of breaking up with Rupali Ganguly, here are the hottest TV news of the day. Read Also – Khatron Ke Khiladi 11: Rahul Vaidya Opens Up About His Link With Abhinav Shukla; says, ‘I won’t say we’re good friends’

Shehnaaz Gill has climbed the ladder of success after her exceptional stint at Bigg Boss 13. She has just returned from Canada after completing the filming of her first feature film with Diljit Dosanjh, Honsla Rakh. Now a video of Shehnaaz Gill from outside a studio has gone viral. We can see the lady in a blue t-shirt and cycling shorts. Some of her team members are with her. It appears that Shehnaaz is wearing a pair of high heels. Team members are seen helping her with her shoes. Now this video has upset some fans. They commented that she was unable to put the shoes on herself. One troll commented: “I see unexpected actions of the actor and actress, what is this so bad?”, While another wrote: “Can not live alone. Are you disabled?”. We can see that people have not appreciated this action of the singer-actress. Read Also – Khatron Ke Khiladi 11: Arjun Bijlani Returns To India And His Photos With His Gang Of Guys Are Too Cool To Handle

Anupamaa actor Sudhanshu Pandey, who plays the role of Vanraj on the show, has finally addressed rumors of a breakup between him and his co-star Rupali Ganguly. Well this started when there were rumors that all was not well between the main actors of Anupamaa, Sudhanshu Pandey and Rupali Ganguly. There were rumors that two groups had formed on the sets: Rupali with Alpana Buch, Aashish Mehrotra and Muskan Bamne, while the other side has Sudhanshu, Madalsa Sharma, Paras Kalnawat and Anagha Bhosle. Sudhanshu recently shared the promotion of the show on his Instagram, but did not tag Rupali on it. This led to rumors about the breakup between the two. Well, in an interview with a web portal, the actor said: ‘These are such silly things that people believe. I don’t even understand how their minds work. How will I achieve anything in my career by untag someone? Generally, the practice is to tag the people who are associated with the image and mainly I copy and paste the link that I receive from someone on my social networks. When the show started, Rupali and I posted a lot of videos together because we were married on the show. Now, I’m married to Kavya (Madalsa Sharma), so obviously, to promote the track, we’ll post videos together. ‘ He further added saying, ‘Rupali and I are also good co-actors and friends. There is nothing wrong between us. And a difference of opinion between two actors is sometimes very normal and can happen any day. There are many times when you disagree on something and get a little angry, but then it is over. And that happens not only with the actors who work on the sets, it also happens between two people at home. Crack or cold war are too strong words to use ”. Also Read – Khatron Ke Khiladi 11: Rohit Shetty Announces Conclusion Of This Year’s Program; calls it an extra special season

Taarak Mehta Ka Ooltah Chashmah actor Ghanshyam Nayak, also known as Nattu Kaka, has been off the show for a few months now. Appears through video calls, but is not present on sets. However, he recently filmed an episode for the show on Daman. The sad news is that Nattu Kaka is currently on cancer treatment. The senior actor was diagnosed with some spots on his neck in April after he underwent chemotherapy. However, the actor has taken this positively and is looking forward to filming for the show again. In an interview with ETimes, Ghanshyam Nayak assured that he is absolutely fine and healthy and that there is not such a big problem. He also said that the audience will see him in one of the episodes of Taarak Mehta Ka Ooltah Chashmah. He also said that it is a special episode and he hopes people will like it. Ghanshyam Nayak also spoke about his cancer treatment.

Rahul Vaidya opens up about his bond with Abhinav Shukla

Rahul Vaidya and Abhinav Shukla are part of Khatron Ke Khiladi 11 and have just returned to India after the shooting in Cape Town. They both disagreed while at Bigg Boss 14’s house. It was clearly visible that Rahul and Abhinav will never be able to become friends. However, during the filming of Khatron Ke Khiladi 11, the contestants were seen sharing happy images and videos on social media. They all formed a good bond while filming in Cape Town. Many thought that Rahul Vaidya and Abhinav Shukla had also become friends now. In an interview with ETimes, Rahul Vaidya spoke about his bond with Abhinav Shukla after Khatron Ke Khiladi 11. Rahul Vaidya said that Bigg Boss and Khatron Ke Khiladi are different shows and that he and Abhinav were never on the same page inside the house. by Bigg Boss. by the turn of events and situations. This resulted in many fights between them. He added: “KKK is about an individual’s ability and how well he performs in stunts. I would say Abhinav and I have been cordial. Pehle show mein hamaare beech mein bilkul bhi baatcheet nahi thi, but today we exchange regular greetings. I won. “I am not saying that we are good friends, but we are cordial as colleagues.”

Indian Idol 12 is getting the TRPs, but the season has come under fire for fake content and excessive melodrama from everyone, including the judging panel. Kumar Sanu, who was one of the guests recently with Roopkumar Rathod and Anuradha Paudwal, has spoken on this matter. He told the Hindustan Times that such shows only provide a platform and talent has to work hard to build a career. He said gossip was the key to getting TRP, so no one should worry too much about it. He told the Hindustan Times: “Jitna gossip hoga, utna TRP badhega, samjha karo. Badi baat nahi hai (The more gossip, the better the TRP. Please understand. No big deal).” He also said that such shows only bring talent to the forefront and these singers find employment in one form or another.

Balika Vadhu actress Avika Gor recently opened up about her friendship with Manish Raisinghan. The two have shared an incredible bond since their days at Sasural Simar Ka. She even talked about a crazy rumor that she and Manish had a secret child together. He told Siddharth Kannan that he read all kinds of crap about Manish and their friendship. There is an 18 year age difference between the two. She had always maintained that he was a friend and his family trusted him immensely. Now, Manish Raisinghan has broken his silence. She told ETimes: “This is one of the most absurd things I’ve ever heard about my friendship with Avika. Why can’t two people be good friends? Why do they have to be in a relationship? 18 years older than her.” .

Yeh Rishta Kya Kehlata Hai actor Karan Mehra and his wife Nisha Rawal surprised everyone when they talked about facing problems in their marriage. On June 1, Nisha complained against her husband for domestic violence. The two even spoke about their broken marriage in front of the media. The actress has been living apart from her husband Karan and is spending quality time with her son Kavish. She recently shared an adorable photo of her four-year-old son Kavish on her Instagram page. She captioned the images as, “Normal seems like a challenge … taken!”