From premarital sex to the approval of boyfriend Shane Gregoire, the recent conversation of Anurag Kashyap and her daughter Aaliyah is a lesson in modern parenthood. 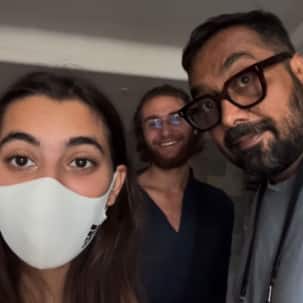 Filmmaker Anurag Kashyap’s daughter Aaliyah has been making news and how. The young woman lives in the United States with her boyfriend, Shane Gregoire. Right now, the two are in Mumbai with their father. They went to Karjat to celebrate their first anniversary. Now, there is a video where father and daughter are chatting. These are pressing issues like premarital sex, peer pressure, unplanned pregnancies, etc. Here’s a look at five highlights from the conversation … Also read: Anurag Kashyap’s daughter Aaliyah thanks her boyfriend Shane for ‘The Best 365 days’ as they complete a year of togetherness.

About her boyfriend, Shane
Anurag Kashyap said that he likes his daughter Aaliyah’s choice of friends and her choice of boys. He said that Shane is a quiet, spiritual person, with qualities that even 40-year-old men don’t possess. That’s kind of a backup for the boy! Also, she said that it was okay with Aaliyah’s friendship with her male friends. Anurag Kashyap said parents need to understand that India has changed a lot. You feel that the older generation is more repressed compared to the current one. He said: “Our children are much more expressive and will communicate, and I think we should stop imposing ourselves.” Also read: filmmaker Anurag Kashyap’s daughter, Aaliyah Kashyap, opens up about fighting mental health issues – watch video

She also revealed that she has called her dad drunk on many occasions. It seems that she made him say hi to all of his friends and made people recite lines from Gangs of Wasseypur. He said that Aaliyah had gotten inside the closets and called him. Aaliyah Kashyap said, “I didn’t do everyone, they wanted to do it! But yeah, I did it because he’s so much fun talking to him when you’re drunk.” He said it was okay with her making her own decisions, which included sleepovers with boyfriends. Like all parents, he said he was worried, but that was it. Also read: Suhana Khan, Krishna Shroff and more star kids who are social media superstars

About Aaliyah suddenly announcing her pregnancy
She also asked her how he would react if she told him she was pregnant. Anurag Kashyap said, “I will ask you, ‘Are you sure you want this?’ And whatever you choose to do, I will always accept it, you know. ” He said that he would accept his options in life, but would tell him that there is a price to pay for every decision. “But in the end, I’ll still be there,” he said.

The filmmaker had some words of wisdom. He said, “No, we need to understand sexuality and sex and our own human body. We need to understand that before we start doing peer pressure things. Anything that is done by peer pressure is not good. Looking good is not good. Anything that is done to belong to a certain group of people is not good. Do it because you want to do something, because you feel ready and you have someone. It has to be special. “