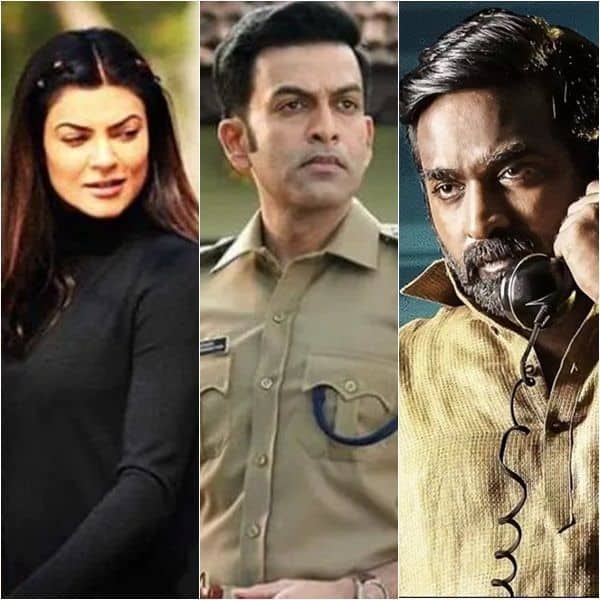 Time to walk you through the latest OTT news of the day. From Sushmita Sen posting a thank you note when Aarya turns 1, Prithviraj releasing the Cold Case sneak peek to Vijay Sethupathi who will likely be joining the cast of The Family Man 3, here’s a look at today’s top OTT news. Also read: Pawan Kalyan, Ram Charan, Suriya and 6 other actors from the South who have flourishing side businesses – see photos

The Family Man 3: Will THIS Kollywood Superstar Join the Cast of Manoj Bajpayee and Priyamani’s Thriller Web Series? This is what we know

Read the full story here: The Family Man 3: Will THIS Kollywood Superstar Join the Cast of Manoj Bajpayee and Priyamani’s Thriller Web Series? This is what we know Also Read – 17 Years Aarya: A Quarantined Allu Arjun Celebrates The Movie With A Heartfelt Post; says: ‘It changed my direction as an actor’

Aarya turns one: Sushmita Sen publishes a thank you note

Sushmita Sen took to social media on Saturday to celebrate a year since the launch of her web series Aarya. “She lost everything, to finally find herself” #Aarya What a moving journey of self-discovery !!! Happpyyyy Aarya’s 1st Anniversary @madhvaniram @amitamadhvani @disneyplushotstarvip, the brilliant cast and crew Most importantly, THANK YOU to all the people who welcomed Aarya with so much love and appreciation, “she captioned with a photo she posted on Instagram.

Malayalam star Prithviraj Sukumaran released the teaser for his upcoming thriller Cold Case on Saturday. The Malayalam movie trailer shows Prithviraj with co-actors Aditi Balan and Suchitra Pillai, and it appears to mix supernatural elements with a mysterious crime scene. Directed by cinematographer-turned-director Tanu Balak and written by Sreenath V Nath, Cold Case is a criminal investigation thriller that will launch directly on Amazon Prime Video and air June 30 onwards.

Actress Avika Gor appeared on Telugu Sixth Sense season 4 game show and raised Rs 1 lakh for an NGO. “This is my second time on the show. It was so good and better. We had some incredible moments with emotion ranging from action, intense to very emotional. All the money we raised goes to Camp Diaries, which is an NGO. and within the protocols. The pandemic is far from over. Let’s focus on getting vaccinated and developing immunity, “he said.

Pavan Malhotra and Zoya Hussain have opened up playing father and daughter in the upcoming Grahan web series, ahead of Father’s Day on Sunday. In the series inspired by author Satya Vyas’ popular book Chaurasi, Pavan and Zoya are joined as Gursevak and his daughter, IPS officer Amrita Singh.

“A father always puts his son’s interest before his own and Gursevak is no different. I have played the role of a father many times in my career, but this role is distinguished by the moving relationship between Gursevak and his daughter Amrita. Series, his The relationship evolves and changes dramatically due to the serious accusations being made against Gursevak. What remains to be seen is whether the father-daughter relationship will survive the test of intense investigation, or the consequences will damage their bond, “Pavan said. .

Zoya added: “I really enjoyed working with Pavan Malhotra, both on and off screen. He comes with a lot of experience, and playing the role of his daughter gave me the opportunity to work closely with him and experiment a lot in the process. on camera, we shared a father-daughter relationship and off-screen it was an extension of the refinement of professional actors who constantly watched and explored. “